There is Nothing Jewish That Is Alien to Me

Recently I’ve read works that deal with Jews and Judaism in crisis—those in the Yiddish-speaking world in the first half of the twentieth century. Scholem’s journey was from Germany to Palestine some time before the khurbn. I find the interview and essays in this volume thoroughly stimulating, provocative, and moving. To wit—-

What interested me then was to find a way to the Jewish primary sources. I was not content with reading about things. This has characterized my whole life.
There was not a single observant Jew in my family circle.

Judaism interested me very much, but not the practice of observances.

After four or five years of intensive study I found that it was possible to master Hebrew.

As you know, it isn’t popular to say that Zionism has fascists, too. But I think it does, even in Israel.

A direct nondialectical return to traditional Judaism, is impossible, historically speaking, and even I myself have not accomplished it.

It is noteworthy that the only great Hebrew writer with whom Agnon felt perfectly at ease was the poet Haim Nahman Bialik, who in this respect had the same inclination for creative anthologizing. END_OF_DOCUMENT_TOKEN_TO_BE_REPLACED

You can take everything from me—the pillow from under my head, my house—but you cannot take God away from my heart.
— Nahman of Bratslav

Everything the true Hasid does or does not do mirrors his belief that, in spite of the intolerable suffering man must endure, the heartbeat of life is holy joy, and that always and everywhere, one can force a way through to that joy — provided one devotes one’s self entirely to his deed.
—Martin Buber

I confess that I am unable to discriminate among them — I love them all and, at various times, one more than the others. Much depends on my mood. Sometimes I need a Bratzlaver tale, sometimes I need a Rizhiner saying. I particularly love the modest Masters, the humble ones, those who didn’t ‘make it,’ not really; those who simply wished to be companions or disciples of great Masters and remained reserved and withdrawn…
—Elie Wiesel

A Hasid was taught to be forbearing with all the world, to be patient, mild, and gentle in judging others, to love man as well as animals, to be shy, bashful, and to avoid honors and social distinction, to serve God for the sake of God rather than for reward. Constant self-scrutiny and repentance assumed a place of prominence in Hasidic piety unknown before, with ascetic exercises as indispensable means of repentance.
—Abraham Joshua Heschel END_OF_DOCUMENT_TOKEN_TO_BE_REPLACED

Today I was rereading Gershom Scholem’s From Berlin to Jerusalem: Memoirs of My Youth, and came across this criticism of Martin Buber: The laconic brevity of those rabbis, their absolute precision of expression, attracted me even more than the same quality in the Latin writers. Added to this was the dialogue of the generations, uninterrupted for so many centuries, whose protocol is the Talmud. Here truly prevailed that “dialogic” life which the later Buber so emphatically placed at the center of his philosophy, although, paradoxically enough, he remained incomprehensibly blind to this, the most genuine evidence that Jewish tradition offered to him. The continuum of the Torah onto which all remarks of the “sages” and their disciples were projected was, in the final analysis, not a truly historical medium—the religious and metaphysical assumptions on which it was based, and with which I was later to concern myself extensively, were too evident for that—but it did have a dignity and, as I was soon to find out, problems of its own.

Patricia Geier and I are reading and discussing Nathan A. Scott’s book, Mirrors of Man in Existentialism. This morning after having read the chapter on Buber, I went to my shelves and pulled off I and Thou. Inside Mev’s copy from the 80s, I found the following page of notes on the classic text. 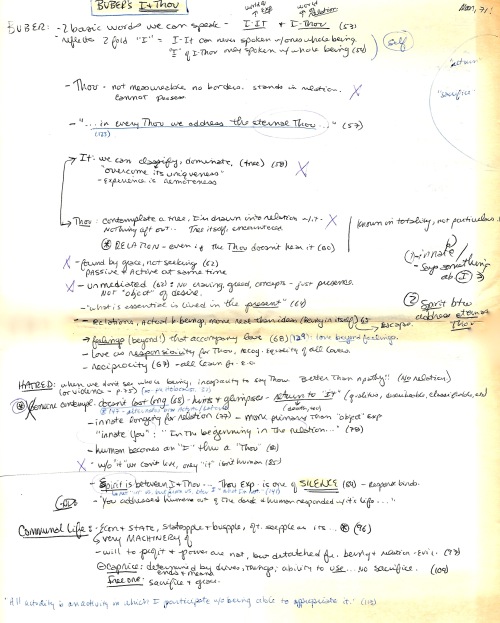 A Jewish Theology of Liberation

A review of Toward a Jewish Theology of Liberation, 3rd expanded edition, by Marc H. Ellis.  Waco, TX: Baylor University Press, 2004.  First Published in the Journal of Palestine Studies (2005).

At the 60th anniversary of the liberation of the Auschwitz death camp, U.S. Vice-President Dick Cheney stated, “The story of the camps reminds us that evil is real and it must be called by its name and it must be confronted.” Palestinians who experience the contemporary evils of home demolitions, apartheid wall, and “collateral damage” from extrajudicial assassinations may wonder when the U.S. government will confront these evils as it retrospectively “confronts” those of Nazi Germany.

It is this juxtaposition—formal, solemn remembrance of the Holocaust in Europe now presided over by influential government leaders, and the ongoing atrocities and injustices in Palestine—that Marc Ellis has spent two decades trying to fathom.  Here, in the third edition of his Toward a Jewish Theology of Liberation, Ellis presents an updated and concise record of this journey in understanding.  END_OF_DOCUMENT_TOKEN_TO_BE_REPLACED