With Gratitude for Amy Schimdt

I am happy to be able to introduce friends to Dipa Ma in our “Facing the Future” class beginning next week:

Because Dipa Ma was able literally to see through the stories of the mind, she did not acknowledge personal dramas of any kind. She wanted her students to live from a deeper truth than their interpretations of, and identification with, the external events of their lives.

One night a student showed up who began asking Dipa Ma a lot of questions. He was quite challenging and confrontational and coming from an abstract intellectual place and trying to get her to argue. At one point she stopped and said in a very calm voice, “Why have you come here? What is your intention?” The sincerity of her question immediately silenced him.

Her heart, like the door to her apartment, was always open.

Dipa Ma and I were on an airplane coming to the States from India. It was very, very turbulent, and at one point the plane hit an air pocket and dropped. Drinks and other objects flew up to the ceiling as the plane dropped downward before hitting stable air again. I kind of screamed. Dipa Ma was sitting across the aisle from me and she reached out and took my hand and she just held it. Then she whispered, “The daughters of the Buddha are fearless.”

–from Amy Schmidt’s essential book, Dipa Ma: The Life and Teachings of a Buddhist Master

Life Is with People

It’s not true that I ask everyone I talk with to do a Share the Wealth. But on Thursday, I did ask Bob Suberi to talk about his time in Venezuela, and just the other minute out front on Chouteau I invited Justin Lorenz to talk about his weeks in Japan. And recently at Maryville I asked Anh to talk about Vietnamese culture, and Toju to talk about Nigeria, and Shahad to share about the Arab Conference at Harvard…

A meeting held a long time ago, put together by the Mattachine Society, had the distinction of being among the first times homosexual literature was publicly and sympathetically discussed. Held in 1952 or 1953, the meeting focused on the topic, “What is the greatest problem facing the homosexual novelist at this time?”

In 1952 they had a problem finding homosexual novelists who would indeed admit that they were gay. Sanford Friedman was one of the writers who agreed to appear. Another of the volunteers was Paul Goodman.

The meeting began, and the moderator posed the question, “What do you feel is the biggest problem facing the homosexual writer today?” He turned to Goodman. “Mr. Goodman, what do you have to say?”

Goodman answered, “I believe the biggest problem facing the homosexual novelist today is the hydrogen bomb.”

Interesting to find an entry for Noam Chomsky in The Newish Jewish Encyclopedia. The brief mention  includes,  “He rose to even greater prominence for his lifelong pursuit of radical leftist ideas, some mainstream (he opposed the war in Vietnam and is a critic of Israeli policies)…”

Mainstream views on the Vietnam War were marked by the debate between the hawks and the doves. The position that opposed the war on principled grounds (U.S. aggression is wrong, Chomsky’s position) was not part of the debate among “respectable intellectuals.” Hence, not mainstream.

Further, Chomsky being a critic of Israel’s policies (a “radical leftist idea”?) and in the mainstream (?) makes me wonder exactly how many New York Times op-eds on Israel’s policies toward the Palestinians he got published from the 1970s to the 2000s.

I’d guess three, at most.

With Gratitude for Ralph Nader

I’ve recently read several books by Ralph Nader, and I’ve been reminded of his immense contributions to the lives of the U.S. American people. 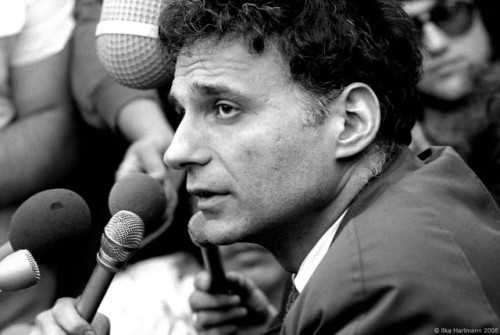 Back to the Brothers?

A friend with whom six years ago I did a reading group of  Dostoevsky’s novel, The Brothers Karamazov, is serious about returning to it sometime soon. Ah, to be re-acquainted with Mitya, Grushenka, Kolya, Markel, Rakitin, Grygory, Snegiriov, Madame Khokhlakov, Ivan, Zhuchka, Katerina, yes, even Smerdyakov!

A Gift from Brooke

Earlier this summer I corresponded with Brooke and mentioned I was learning Yiddish.  She kindly  mailed me the following…

It was never my goal to put together a collection of horror stories, to overwhelm the reader. I was collecting the human. Dostoevsky asked the question: “How much of the human is there in a human being?” How can the human in this human being be protected? That’s the question I’m looking to answer. I collect the human spirit. You may say: it’s an ephemeral thing, too elusive. But art attempts to capture it. And every era has its own answers.

–Svetlana Alexievich, In Search of the Free Individual: The History of the Russian-Soviet Soul

“Sanders and Warren are both fighting against the neoliberal policies of austerity. They are being attacked by Wall Street, the media, and the Democratic Party leadership. Rather than allow them to suffer death by a thousand cuts, let’s call for them to combine their efforts in an act of political jiujitsu. In this case 1+1 does not equal 2, but something much greater and potentially revolutionary. Sanders + Warren will provide the leadership we desperately need.”

Please check out my friend Andrew Wimmer’s site, and pass along to any who may be interested.

Stephen Batchelor’s Gotama: A Dissenter, a Radical, an Iconoclast

Stephen Batchelor has been exploring for quite some time a Buddhism with overt religiosity stripped away. His thoughtful, engaging project reminds me of a similar one undertaken by John Dominic Crossan regarding the historical Jesus. The following passages come from his 2010 book, Confession of a Buddhist Atheist; as you read through them, compare and contrast with other Buddhist teachers you’ve read, from Pema Chödrön and the Dalai Lama (Tibetan Buddhism) to Thich Nhat Hanh (Vietnamese Mahayana Buddhism).

I was beginning to suspect that the Mahayana traditions had, on certain points, lost sight of what the Buddha originally taught. 97

The Buddha dismisses such questions, because to pursue them would not contribute to cultivating the kind of path he teaches. 99
It seemed clear from these texts that the Buddha’s original approach was therapeutic and pragmatic rather than speculative and metaphysical. 100

This story of intrigue, betrayal, and murder locates Gotama in the midst of a highly volatile world in which he was deeply implicated. 108
… his role as a social critic and reformer was one who rejected key religious and philosophical ideas of his time, who ridiculed the priestly caste and its theistic beliefs, who envisioned an entirely new way in which people could lead their individual and communal lives. 109
I have to acknowledge that the vast majority of Buddhists have shown little if any interest in the personality of the man who founded their religion; they have been content to revere a remote and idealized figure. 110

He saw his teaching—the Dhamma—as the template for a civilization. 110

Gotama’s voice is confident, ironic, at times playful, anti-metaphysical, and pragmatic. Over the course of his formative years, he had achieved an articulate and self-assured distance from the doctrines and values of Brahmanic tradition. But exactly how he did this, we don’t know. 124

Gotama’s awakening involved a radical shift of perspective rather than the gaining of privileged knowledge into some higher truth. 129
… Gotama did not encourage withdrawal to a timeless, mystical now, but an unflinching encounter with the contingent world as it unravels moment to moment. 129 END_OF_DOCUMENT_TOKEN_TO_BE_REPLACED