Carly is taking my Humanities class at Maryville and shared the following with me, and I am happy to share with you.

After watching this documentary I realized I know little to nothing about China, or about the struggle their people face, like Ai Weiwei. It’s shocking to think that the things that he faced are something many people face in China. Just because people try to speak up about basic human rights and common decency. I think Ai Weiwei’s a strong man, even though he grew up in a period where many artists like his father were persecuted because of who they were and their ideas. Growing up in a situation like that you’d think he’d stray from the artist path, but instead he continues what his father and many other artists were doing. He’s not radical about it either, he chooses what battles to face and doesn’t stop until he sees results. Other artist are scared to express themselves or their feelings against the government but Ai Weiwei isn’t. His art is so blunt and to the point, where as others hide their true meaning. He doesn’t let the government scare him into being something he’s not. He stays true to himself, which is a kind hearted person who cares for the people of his country.

What I like about Ai Weiwei is that he’s scared, he’s scared of what will happen to him, but he faces this reality that he’s created for himself head on. He reminds me of Gandhi in the sense that he doesn’t use violence to get his point across. He goes with the government’s system, even though he knows it’s wrong. It’s a long fight, but he’s willing to wait for what he believe is right. I think the people who are helping Ai Weiwei either with his art or going to his parties, are brave people as well. Ai Weiwei has some protection since he’s well known in other powerful countries like the U.S but the ordinary citizens of China don’t get that benefit. Like Ai Weiwei they could be taken hostage at any point in time, or worse yet killed if they’re associated with him. But even though they know all of this, they continue to stick with him and his beliefs.

What baffles me the most about this documentary is that events like this are happening in China. I thought since we owed so much money to them, they had their government a little more well run than ours, but I see now that’s not the case. Their government ignores the will of the people, and acts in its own self interest, it knows no meaning of democracy. If I learned anything from history it’s that if the people aren’t happy with their government they’ll revolt. And I think Ai Weiwei’s art is something that will push towards revolution, it’ll make the people see what’s wrong with they way they’re living, and they’ll fight for a change.

Although this documentary holds a heavy meaning with some heart aching moments, there are some silver linings. Like Ai Weiwei’s art, my favorite piece in the documentary are the sunflower seeds. When I first saw them I thought they were ordinary sunflower seeds, and I was really confused about their significance. But then I saw that Ai WeiWei and many other people made the seeds out of porcelain, each one hand painted and personalized. There was over hundred million of them too. Each sunflower seed is different, no two are the same, and that’s the point Ai Weiwei is trying to make about people in society. We’re all unique in our own ways but ultimately we’re all the same. 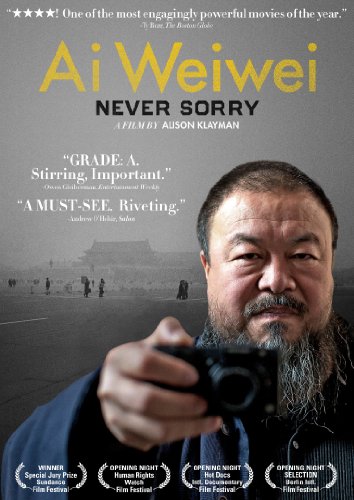 One Comment to “On “Ai Weiwei: Never Sorry” by Carly Hofstetter”