Now they languish under our bombs and consider us, not their fellow Vietnamese, the real enemy. They move sadly and apathetically as we herd them off the land of their fathers into concentration camps where minimal social needs are rarely met. They know they must move on or be destroyed by our bombs. So they go, primarily women and children and the aged. They watch as we poison their water, as we kill a million acres of their crops. They must weep as the bulldozers roar through their areas preparing to destroy the precious trees.

Toxic chemicals and defoliants were dropped, and lot of napalm. Many people today still have scars from napalm bombs. There were different kinds of fragmentation bombs, some the size of a fist. Even now people get killed from small, unexploded bombs. Wounded people were looked after by their families, or by the community if they had no children or relatives. The dead were buried everywhere, without coffins. Three people died in my family.

The Americans cannot repay this debt, because it’s too big.

Unusual among Americans, Fred Wilcox has been willing to steadily look the suffering of the Vietnam War in the face.  His 1983 book is entitled Waiting for an Army to Die and it helped to raise awareness about the afflictions of U.S. veterans battling with Agent Orange.

Wilcox’s second book on Agent Orange was published last fall, this time focused on the Vietnamese people who have been damaged by the U.S. war:  Scorched Earth: Legacies of Chemical Warfare in Vietnam.

This year marks the 50th anniversary of the official U.S use of such herbicides as Agent Orange in Operation Hades, later renamed Operation Ranch Hand. After many years of research and study, Wilcox and his son, a photographer, traveled in Vietnam in 2009 to come into direct contact with the  human suffering of successive generations of Vietnamese who have been exposed to Agent Orange.

One of the most valuable aspects of the book is the voices of the Vietnamese themselves.  One urged Wilcox, “Go out to the countryside. Meet Agent Orange victims. Listen to what these people say. That is the best way to learn about the effects of Agent Orange.”[ 77]

One former soldier whose wife had monstrous offspring said, “In my family, there is always a fight with my children screaming all the night. After nearly 30 years since peace has been restored in the country, we have not experienced a single day of peace.” [46]

Doctor Nguyen Trong Nhan asserted, “Vietnam and its people continue to suffer from severe war wounds left behind by the largest chemical warfare in mankind’s history…. Thousands of people have already died in agony with deep indignation towards the perpetrators of crimes. Many women have suffered reproductive complications and even the total loss of the right to be a mother.” [43, 47]

In her work during the war, Dr. Nguyen Thi Ngoc Phuong noticed an increase in babies born with defects: “[In 1969]  I delivered for the first time in my life a severely deformed baby. It had no head or arms. The mother didn’t see her child, and I tried to hide my tears and my fear from her. I couldn’t bring myself to tell her what the baby looked like, so I said it was very weak. It died, and I just told her that it had been too weak to live.” [156]

She told Wilcox that she has extended invitations to the manufacturers of Agent Orange to come to Vietnam and see the human consequences of their product.  But they refuse to acknowledge the suffering and their role in causing it.  Dr.  Nguyen thinks that people of conscience the world over should boycott the products of companies like Monsanto, until these companies render compensation to their victims.

Back in 1973 as U.S. troops were leaving Vietnam, activist and poet Denise Levertov offered the following challenge to her fellow American citizens: “I would like to see this withdrawal followed by the penitent presentation to the people of Vietnam by the U.S. of huge quantities of food and supplies—such quantities that people here would feel the pinch, actually sacrifice something, not merely donate a surplus. I would like to see this given absolutely outright, and unaccompanied by U.S. ‘advisers,’ though  large numbers of doctors, nurses and other people who might really be of use in reconstructing the ravaged country might humbly offer their  services to work under Vietnamese supervision. Such acts of penitence distinct from the guilt that stews in its own juice would do something to make the future more livable for our children.”

Decades later, Wilcox’s accessible, compassionate, and indignant book is a call to Americans to contribute to a future more livable for Vietnamese children and families. Refusing to close his eyes to the suffering caused by U.S. militarism, he asks, “Do American Agent Orange children deserve more help, more love and kindness, than those who lie twisted, blind, and deaf upon pallets and floors and bamboo beds throughout Vietnam?” [138] 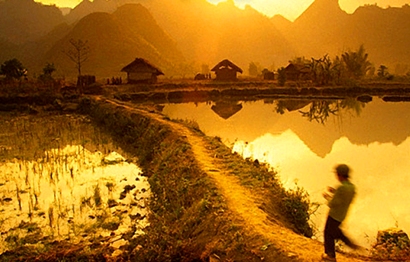