In Gratitude for Howard Zinn

The other night at the Webster University Film Series, I saw the documentary-tribute: Howard Zinn: You Be Neutral on a Moving Train. It is an inspirational portrait of a working-class Jewish man who served as a bombardier in World War II and went on to become a historian and teach at Spelman College in Atlanta during the Civil Rights Movement and then at Boston University during the height of the anti-Vietnam war movement.

Zinn is best known for his A People’s History of the United States, which considers American history from a different perspective from that of generations of high school and college textbooks, which might be fairly called the cheerleading perspective on American history. Zinn’s contrary starting point is: What was this history like for the natives, blacks, women, workers, minorities and activists? In the film Zinn points out that the book has been widely reviewed in newspapers and magazines, but never in the official academic journal of U.S. history.

Perhaps Zinn is not taken seriously by his fellow academicians because he writes primarily not for other academics but for students (of all ages) and citizens to understand the past so as to have a positive influence on the present. In this respect, Zinn reminds me of another Boston-area professor, Noam Chomsky, whose scores of books demystify U.S. foreign policy and the role of the intelligentsia in propagating the agenda of elite groups, which is typically passed off as “the national interest,” rather than the special interests they really are.

The film is obviously an admiring portrait of Zinn, whose warmth, determination and conscientiousness shine through the still photos, the film clips from the 1960s (including one with Dan Berrigan before and after their 1968 trip to Hanoi), and the latter-day interviews with Zinn. His critics weren’t interviewed, and I am sure former Boston University president John Silber would have harsh words for Zinn, who has been bestowed, I’m sure, with the usual invective lavished on critics of power over the last forty years – Communist, anti-American, traitor and maybe even “self-hating Jew.”

Perhaps because I saw the movie a couple of days ago, Zinn was on my mind in my Saint Louis University Social Justice class today. As an opening reflection, I shared the following quotation from Dr. Martin Luther King;’s “A Christmas Sermon on Peace” at the Atlanta Ebenezer Baptist Church in 1967: “Now let me suggest first that if we are to have peace on earth, our loyalties must become ecumenical rather that sectional. Our loyalties must transcend our race, our tribe, our class, and our nation; and this means we must develop a world perspective. No individual can live alone; no nation can live alone, and as long as we try, the more we are going to have war in this world. Now the judgment of God is upon us, and we must either learn to live together as brothers [and sisters] or we are all going to perish together as fools.”

I invited my students to prove me wrong: I suggested that, no matter who is elected President in November, when the national MLK holiday comes around in mid-January 2005, neither Mr. Bush nor Mr. Kerry would dare, in their speeches about King’s legacy, to mention this King, the anti-war King. Sure, whoever is president will remember and approve of the “I Have a Dream” King, but not the relentless critic who discerned God’s judgment on the U.S. for its mass murder in Vietnam. Around the time of the King holiday, the President (or any mainstream Democrat or Republican leader) won’t be quoting from King’s April 1967 Riverside Church speech, in which he described his own country as “the greatest purveyor of violence in the world today.”

And lest my students think I am somehow a zealot for the liberal Mr. Kerry, I pointed out that John Kerry at age 27 could at least have understood Dr. King, for this is the Kerry who spoke before Congress about the war crimes and atrocities committed by U.S. troops in Vietnam. That Kerry is now gone, replaced by one whose loyalties are all too predictably “sectional,” to wit, his support of the war in Iraq.

The title of the movie sums up Zinn’s committed, engaged brand of scholarship and activism, best exemplified, I think, in the following quotation from South African bishop Desmond Tutu: “If you are neutral in situations of injustice, you have chosen the side of the oppressor. If an elephant has its foot on the tail of a mouse and you say that you are neutral, the mouse will not appreciate your neutrality.” As a professor and writer, Howard Zinn is not neutral and, in his own modest way, he has found a path similar to the Jesuits at the University of Central America in San Salvador: to put research and knowledge in the service of the people who can find within themselves and in their communities the power to change the way things are to the way things ought to be.

I’ve read Zinn for years before I saw this documentary, which only increased my respect for him. I also have had a personal reason for gratitude. In early 2001 I had just finished the proofs for my book on Elie Wiesel, and I needed people to write blurbs for the back of the book. I sent an email to Howard Zinn (who didn’t know me) to inquire if he’d be willing to do this. I realized that he probably gets asked to do this once or twice a week. In very short time, I heard back that he was happy to do so, so I sent him a copy. He sent me some weeks later the following blurb: “Mark Chmiel offers a bold and much-needed analysis of the moral pretensions of one of our country’s most prominent public intellectuals. His thoughtful and measured examination of Elie Wiesel’s ideas and actions reaches beyond the subject of this book into the heart of what is moral behavior in a troubled world.”

I would contend that the subject of the documentary on Howard Zinn is “the heart of what is moral behavior in a troubled world,” a world that has been ravaged by U.S. military and economic intervention (from Vietnam to Central America to the Middle East, etc.), by the growing economic disparity between the nations of the North and the global South and by the reliance on violence as the supposed cure-all to any social problem. After seeing the film, I went to my shelves and found a book of interviews between David Barsamian and Zinn, entitled, The Future of History. In the following passage, Zinn reflects on his days at Spelman College in the early 1960s and offers an inspiring and challenging vision for those of us who spend a good part of our life in schools, whether as teachers, students, administrators or staff:

Anybody who was in any way in the U.S. socially conscious knew vaguely that there was racial segregation. But to be right there and witness it in action, to talk to my students about their early lives, about the first time they realized that they were black and being considered different and treated differently. To participate in sit-ins and to see the atmosphere around us in Rich’s Department Store suddenly change from friendly to hostile when four of us, two black and two white, my wife and I and two black students from Spelman, sit down in this lunch counter at Rich’s. Suddenly it’s as if a bomb had been dropped or plague been visited on it. The people gathering around us and shouting and cursing. Getting an inkling, being white people, just an inkling, of what it is to be black and be subject all your life to the thought that if you step one foot out of line you’ll be surrounded by people who are threatening you. That’s a learning experience. Learning comes in layers. There’s something you think you know? You don’t know it until you see it very up close, penetrating you. So it was a learning experience.

Through truth-telling, nonviolent direct action and solidarity with people living on the underside of the American Dream, domestically and internationally, Howard Zinn provides an example for me, as a university adjunct professor, how to work, teach and learn in a constructive way in these dark times. 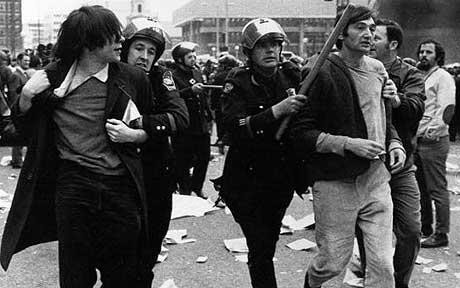